What would you call these? 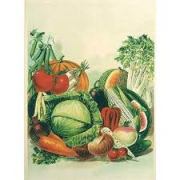 Vegetables, right? And if someone asked you, “What are the home-grown things that grow in a garden?” I bet you would have said the same thing.  Maybe to be clever, we can add veggies or the even more clever (cause it’s shorter) veg.

How about garden sauce?  No, it doesn’t mean “sauce” as in liquid-esque-thing-to-pour-on-other-things.  Garden sauce means “vegetables”.

And what grows in a victory garden? Garden sauce.

Garden sauce is an American term which we find in several spelling guises, each of which reflects a variation on pronunciation: we have garden sars, and garden sarse, and possibly my favorite, garden sass.

One very early written appearance of sauce as “vegetable” is in Beverly’s 1705 History of Virginia, “Roots, Herbs, Vine-fruits, and Salate-Flowers‥they dish up‥and find them very delicious Sauce to their Meats”.

We find this term in writing in 1791, “For want of garden sauce, they . . . eat more flesh than is consistent with their health”. Some things never change.

Yes, let’s load our soldiers and allies with carbs and animal fat.

Oh, and why, would sauce mean “vegetables”?

The word sauce comes from the French sauce, kin to the Spanish (and Portuguese and Italian) salsa, all of which descend from Latin salsa, which is the feminine form of salsus “salted”. Salad, also, is descended from the Latin sal “salt”, which makes it an etymological sibling of sauce. We see salad in different forms across Indo-European languages – French and Portuguese salada, Spanish ensalada, German, Swedish and Russian salat – some of which are echoed in different dialects of English.

Salad refers to a “cold dish of herbs or vegetables (e.g. lettuce, endive), usually uncooked and chopped up or sliced” to which other things can be added. A similar definition can be given for relish, which is also (basically) chopped up sauce.

We’ll deal with relish later, for now it’s back on the sauce.

From Knickerbocker’s 1809 History of New York, we have this delightful quote, “Some buxom country heiress,‥deeply skilled in the mystery of making apple sweetmeats, long sauce, and pumpkin pie”.

Long sauce?  Ahem.  It’s not what you think.

But, DARE also has a quote from 1825 that also names round sauce (or “sarse”) as an option.  Round sauce remained undefined, though DARE does have an entry for round squash, also called round sauce squash, round white squash, or white round squash, all of which refer to summer squash (and especially pattypan squash).

I’m betting that this is what ’round sauce’ was

Garden stuff was another old term for “garden vegetables”, as was garden truck.

A truck full of garden truck

Garden truck is also an American term for “garden vegetables”.  These are not, in case you were wondering, vegetables grown in the bed of a pickup (which I have seen).  The use of truck here is much older, harkening back to its original sense as a verb meaning “to give in exchange for”.  Following from the verb, truck the noun comes to mean the “action or practice of trucking; trading by exchange of commodities” and then comes to denote the things being traded.

This is why we can (still) run across a saying such as to have no truck with someone to mean that you “don’t want to have anything to do with them” (a saying that’s been around since at least 1625).

Garden truck is noted in DARE to have appeared in writing (in a Maryland newspaper advertisement) in 1784.  It looks like truck was originally applied to different kinds of goods, including grain, cotton, medicine and other personal goods (the latter also being referred to as traps or junk).

Loading a trunk with truck and traps and junk and stuff

Between the mid-1800s and 1970s, the word trucker could be used to refer to a “gardener who sells produce”.  A truck garden (or truck patch) was the place where you grew such produce.

That “vegetables” can be called sauce, sass, truck, stuff example is a good reminder that a language contains a good many more words for things than you think!